Hint: use your right mouse button to open a new window for external sites (or back button to return here). 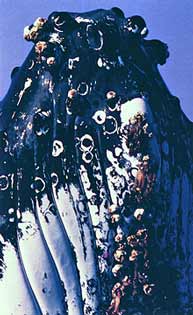 If you wish to use any of this material, please respect the copyright.  Contact Max Egan / Southern Cross University for permission.

Whales and dolphins belong to a group of mammals called Cetacea. Like other mammals they are warm blooded, give birth to living young and feed them on mother's milk.

They have the most highly evolved brain of all aquatic animals and are among the most intelligent animals on earth. Their ancestors lived on land and returned to the sea about 60 million years ago.

Do they have teeth?

Whales and dolphins are divided into two major groups based on whether they have teeth.

Whales with teeth include the killer, pilot and sperm whales, and dolphins. 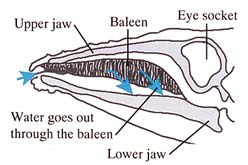 Instead of teeth, these whales have hun­dreds of thin plates called baleen, or whalebone (right) which hang down from the upper jaw.  The baleen acts like a sieve, trapping food inside the whale's mouth as water is forced out through the sides.

The Humpback Whale (Megaptera movaeangliae) belongs to a group of six species known as rorquals. 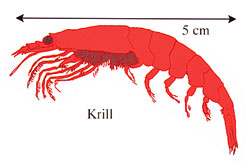 These whales have pleated throats with grooves that expand like an accordion as the whale draws in vast quantities of water during feeding.

The whales appear to feed only during the summer months in the food­rich waters of Antarctica.

Their diet consists of the prawn-like krill Euphactisia superba (right) and small fish.

Humpback whales are easily identified by their long knobbed pectoral fins (or flippers) that are up to 5m long (below).  The first part of the humpback's scientific name - Megaptera means "big wing".

These whales have very large heads, covered with knobs (photo above) the size of golf balls called tubercles. Each knob has a coarse hair growing from it that is believed to act as a sensor.  The head and pectoral fins are often encrusted with barnacles.

The 3m wide fluke or tail can propel the whale through the water at more than 20km per hour for short periods, but during migration they travel between 4 and 12km per hour.

The humpback is the fifth largest whale in the world, growing to an average length of l 6m and weighing about 40 tonnes. The female is slightly larger than the male.

On the east coast of Australia humpback whale calves are born in the warm waters of the Great Barrier Reef during July and August, after a gestation period of 11 to 12 months.

Newborn calves are about 4.3m in length and weigh about 1.5 tonnes. They are nursed until they are a year old and about 8m long. 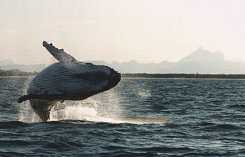 Whale Watching in the Northern Rivers

Whale watching season runs from late June through to late September each year, when Humpback and Right whales move north from Antarctica to their winter feeding and birthing territories.

If you wish to use any of this material, including images, please respect the copyright.  (Big Volcano has permission, you do not, unless you obtain it directly.)  Contact Max Egan / Southern Cross University for permission.